by Michele Friedmann | May 7, 2022 | International Travel 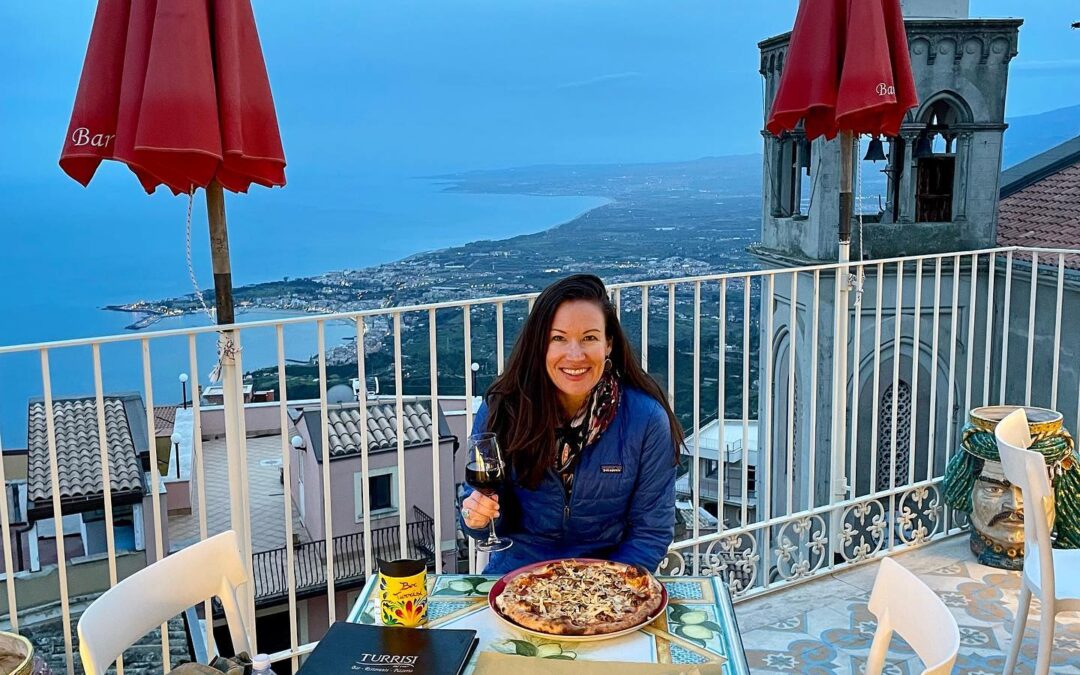 Visiting the birthplace of my grandfather had always been high on my travel bucket list. We were very close and he actually inspired me to travel and see the world. Ben Spina was the happiest, light-hearted, people-loving person I ever knew. Therefore, I knew there had to be something extra special about this region of the world! And I was not disappointed.

I flew into Catania and enjoyed my first two nights at a peaceful villa in the countryside. Surrounded by immaculate fields filled with orange trees and lime trees- I could picture a memorable yoga retreat here! Seven large rooms comprised of this charming estate. My favorite area of the house was the decorated dining room containing so much color, character and history. Exploring the grounds was surreal, especially when we wondered into a very old cave! One can savor wine tastings right before a massage in the sauna.

Valley of the Temples

I had read about the vast history of Sicily before departing on this trip- it is long and impressive! No other region of the world has been conquered quite as much as Sicily. Visiting the UNESCO world heritage site the Valley of the temples was eye-opening to say the least. The world’s second oldest temple can be found here, and it appeared to be restored in pretty good shape . We had a lovely picnic lunch at nearby Kolymbetra Park and enjoyed the scenery. We next visited posh Hotel Villa Athena and enjoyed the views of the temples and a delicious afternoon snack!

We spent the night at charming La Foresteria. This hotel is situated on a hill with lovely views of the vineyards and olive groves below. The Planeta family runs both the hotel and winery and I was extremely satisfied with the variety of wines we tried! The dinner was equally impressive- ravioli, sea bass and a desert that looked exactly like an orange. They offer cooking classes here which I can imagine would be quite the treat.

The next day we drove to a winery in the countryside. I learned that Sicily makes Italy’s best sweet wines! We enjoyed a tasting and diverse array of delicious finger food. That night we stayed at a luxury hotel in the Marsala region. We were informed Harrison Ford and his family recently stayed here while he was filming Indiana Jones! I loved the plethora of activities to do – bike riding, horseback riding and boating into the sunset. Salt mines are not far away- which make for scenic views. You can even stay in the tower room and feel like a real princess!

The food in Sicily is spectacular- best in Italy I would argue. Therefore, I was very excited for our Palermo street food tasting tour. And I wasn’t let down! We tried arancina (rice ball), panelle & crocche (chickpea and potato fritters) and their famous cannoli. I was dared to try pani ca’ meusa (spleen sandwich) and I did! It tasted just like an Arby’s roast beef. Our local guide was fantastic and a lot of fun. We participated in a fun cooking class at his nearby restaurant Cin Cin. We made pasta and eggplant salad. Best part was easting the delicious dish afterwards! The cooking class and street food tour is a must do when you are visiting Palermo.

Chefalu is a charming seaside village outside of Palermo. Built in the 1400’s by the Normans, the architecture and craftsmanship is truly inspiring. This village is a short distance from Palermo and gets frequent visitors over the summer. I enjoyed running along the promenade and taking in the views of the sea, exploring old town, shopping and the delicious seafood restaurants. The sunsets were magical. During the summer, you can lounge on the beach. Our spectacular guide, Angela, told us how she spent time at the nunnery by the sea when she was just 14!

Eating with the Locals

The next day was very special. We visited the nearby town of Polizzi Generosa where Angela’s parents live. They cooked us a lovely meal and it was so nice to be invited inside their home. We savored the meat and cheese spread, spaghetti, sugared strawberries, wine and limoncello! And of course ate way too much. Dulce&Gabbana have a place in this peaceful town and are actually putting in a lovely bed and breakfast. Angela’s father, also named Michele (pronounced Michael) reminded me so much of my grandfather I got emotional at one point! His energy, contagious smile, love for people and food. What an afternoon to remember.

On our way to Taormina we stopped at Castelbuono- an enchanting jewel known for it’s 14th century town and famous castle. We tried “pistachos panettone” (also known as sweet bread) and I was instantly hooked! I bought a variety to take home and I can’t believe how moist and delicious it remained even somewhere as dry as Colorado. Great shopping here as well.

Taormina is the most visited spot in Sicily- and for very good reason! Spectacular views of the Ionian Sea and Mount Etna greet you at every turn. I loved walking all around, visiting the gardens, shopping and taking in the scenery. I visited the Greek Theater- the 2nd largest in Sicily and world’s most admired. I was mesmerized at how intact it was and could clearly picture gladiator battles here.

We took a jeep ride to Mount Etna and hiked around the active volcano. We experienced all four seasons in one afternoon- rain, wind, snow and sun! Definitely come prepared! It was an adventure not to be missed. I learned that this active volcano creates mineral rich soil- great for growing a variety of grapes- which is the reason why Sicilian wine is exceptionally delicious! We visited a 250 year-old nearby winery with a fascinating history. Bullet holes in the trees were pointed out from the war! We were served the most delicious lunch and enjoyed a variety of savory wines. This was an afternoon to remember forever!

Fiumefreddo- the Godfather and my Grandfather

I had been waiting for this day the entire trip: we were going to be visiting the town my grandfather was born and grew up in! I was very close to him- in fact he inspired me to travel the world and is probably the reason I started my travel agency! He always insisted we travel at every opportunity we get. Fiumefreddo was equal parts charming and old. The vibe was peaceful, with plenty of orange trees and lemon trees and views of the sea. I briefly visited the cemetery and saw one gravestone with the last name Spina- it could be a relative. We then visited the villa the Godfather was filmed. What a passionate owner- delighted to meet all of us and tell us everything about the filming that went on there. Dressed to the nines. He kept taking my camera and taking photos of the villa- clearly he is very proud! Driving away from Fiumefreddo, a rainbow appeared in the sky. It’s my sign and I knew my grandparents were close by at the moment. What an incredibly special afternoon for me!

Castle on the Hill

The next day I decided to explore the mysterious castle on the hill in Taormina. My taxi driver suggested we briefly stop at the Madonna della Rocca Church. A small church in a cave! We took the windy road up to Castel Monel. I savored the views of Mount Etna and the town of Taormina below. I was advised to try the pizza at Bar Tarissi. I had no idea what I was in for! Known for their “phallic displays” this bar/restaurant had it’s own unique style. Certainly look it up before you take your family there. I sincerely appreciated the views at the top terrace and the eggplant, mozzarella and ricotta cheese pizza hit the mark. I couldn’t help but purchase their homemade almond wine (in a phallus shot glass) for my boyfriend. When in Sicily!

What an unforgettable experience exploring Sicily was. I tell everyone- it’s authentic Italy. The food, wine, history, people and the views. I am already planning my next visit back!